What can travel companies learn from D&G’s debacle in China?

Dolce and Gabbana will probably never sell another handbag in China. A social media misstep (granted, one that appears to have been founded in a deep lack of understanding of modern China), combined with the arrogance of the brand, has had catastrophic results for the fashion house.

On November 19, ahead of a big fashion show in Shanghai, Dolce and Gabbana posted a series of three videos featuring a model trying to eat Italian foods (pizza, cannoli and spaghetti) with chopsticks. The model was laden with gold jewelry and surrounded by lanterns while traditional Chinese music played in the background. This portrayal is stereotypical and out of date.

The videos are, at best, simple and lightweight (two adjectives that do not accurately embody Chinese culture) and at worst, racist. Netizens in China protested strongly on Weibo and other platforms. In response, Steffano Gabbana began sending blatantly racist direct messages to the protestors (D&G claims his account was hacked, but I’m tempted not to give a guy with his track record the benefit of the doubt).

Three days later, the brand in China has all but collapsed: 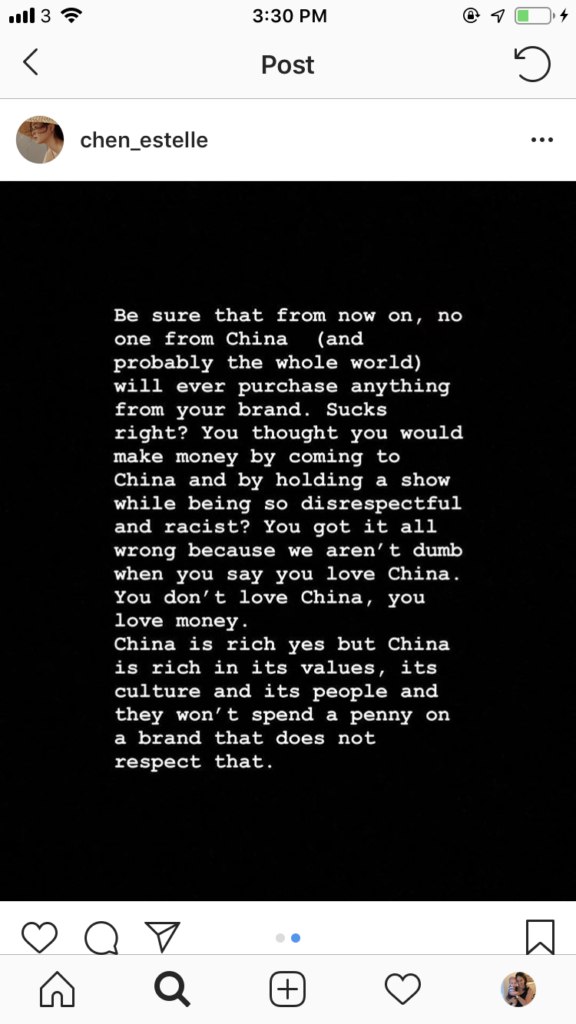 What can travel companies learn from this?

We know that brands and destinations can fall out of favour with Chinese consumers extremely quickly. They rightfully have no tolerance for cultural misappropriation. With influencers empowered to take a stand, combined with the sway of social media, the videos and Gabbana’s insane response messages reached enormous audiences incredibly quickly.

In travel, we often hear a lot of stereotypes about Chinese travellers. They must have slippers in hotel rooms! They want to eat Chinese food! But the reality is: Chinese consumers are sophisticated and worldly. Destinations and operators shouldn’t pander to any stereotypes; they should not amend products or marketing to cater to what they perceive Chinese travellers will be like, because they are probably wrong.

At Bannikin Asia, we encourage our clients to showcase their products to Chinese clients as they do to other markets – sure, more detailed information may be needed in marketing and pre-departure materials. But adjusting the product to fit a perceived notion of what the Chinese consumer might like is sure to fall flat.

Finally, a misstep on social media can spread like wildfire. If brands do make a mistake, they need to be honest, own up and apologize. As @DietPrada said on their Instagram today “Respect the consumers of the markets you want to profit from.”